Info Dumping and How to Avoid it

One of the biggest issues I see from new authors writing genre fiction such as romance is a tendency to info-dump. That is, to get bogged down in prolonged explanations of background or descriptions. 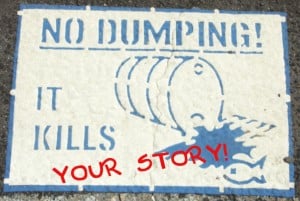 Particularly at the beginning of a romance novel, it is best to jump right into the action. As discussed in my post on plotting, you typically need to set up your character’s life as usual, but this should not be a long chapter of exposition about the character’s life up until now. Instead, set up a scene with your hero or heroine, which exemplifies their day to day life and gives us a little insight into their character as you already begin to move your story forward.

Instead of simply explaining your character’s background, or their personal description, weave it in and make it relevant to your scene, part of the action, and where possible even include it as part of dialogue. While this is most important at the beginning of a story when you really need to capture your reader’s attention, it remains relevant throughout if you want to maintain a well-paced novel.

Let’s look at some examples.

Those are just a few little examples, but you get the idea. Of course, some exposition is important and sometimes there’s no way to incorporate it directly into action or dialogue. In these cases just ensure it is relevant to the scene and important to your story. Most of all, make sure it is both interesting and succinct, and does not become an info-dump.

Describing the setting is the sort of narrative description that is impossible to avoid, and is vital for your world building and for adding color to your story. That said, even this can also be intertwined with your closer narrative and made relevant to the scene in question. For example, think about how your main character feels about the setting they are in. How do they see it specifically, and how does it affect their feelings about what’s going on within that setting?

Another one of the main exceptions with regard to avoiding long paragraphs that do not directly move the plot forward is particular to romance. In romance you are free to get bogged down (just a little) in your character’s feelings. It is important in romance that we know how your hero or heroine is feeling, especially in regards to the developing romance. Paragraphs of your characters internal thoughts and feelings are vital to a romance as they allow the reader to fall in love at the same time as your hero or heroine, experiencing their feelings and concerns as the story unfolds. That said, these must always remain relevant to the scene and they are best achieved when folded into external action and surrounding dialogue.

Of course, as in every case of writing there are exceptions to all these rules. There will always be authors who manage to write paragraphs, even pages, of exposition without it becoming an info-dump. In literary works this is a particular art form. For most writers, however, and for most genre fiction in particular, the most important thing to remember is to stay focused on the movement of your plot. In romance we especially love dialogue, so allow your characters’ dialogue to keep your reader engaged. Don’t get bogged down in description and background. Keep us in the now. Keep us interested. Keep us wanting more.

Shares
Partner of The Alliance of Independent Authors!

Has this article been useful?